What are primitive reflexes?
Movement stimulates brain connections. Neonatal reflexes are present in the womb and the early stages of life and occur in a specific sequence to wire the brain for optimal sensory and motor function. These primitive responses originate in the brain stem and cause automatic, repetitive movements. Babies were designed to do reflex movement patterns until more sophisticated neural connections start to form. These allow babies to have conscious control over their movements. The reflex is triggered by a specific internal or environmental stimulus, and always cause the same response. The knee-jerk reflex in adults is an example of a healthy adult reflex pattern.

The primitive reflexes are systematically integrated and replaced by the higher postural reflexes, starting with head control. A developmental sequence is triggered where postural control, gross motor function, balance and coordination and sensory integration are perfectly orchestrated.

What happens if something goes awry in this harmonious sequence? Where do things go wrong? And how does it affect development? What would interfere with this process of primitive reflex integration?

To begin: The primitive reflexes are integrated once they have served their purpose and before children turn one. If a certain reflex is retained for some reason, it keeps creating uncontrolled reflexive movement patterns, which interfere with more age-appropriate postural control and skilled movements.

Causes of retained primitive reflexes
The birth process is a key factor: Traumatic birth or caesarean section, breech or induced birth may all cause retained reflexes.
Injuries or trauma, lack of tummy time, too little healthy developmental opportunity for movement, chronic ear infections, chronic stress, environmental toxins and neurodevelopmental toxins like heavy metals (mercury) may lead to non-integration of primitive reflexes.
Reflexes that were completely integrated may reappear at any stage of life due to any of the reasons above.

What causes primitive reflexes to integrate?
Movement. Babies do stereotypical movements when starting to reach, grasp, roll or be more upright. These movements, when repeated enough times, create new brain connections to replace the primitive pre-programmed brain stem reflex loops. The new connections override the old. But the primitive connections remain dormant. If something causes harm to the brain control centre at any stage of life, it will revert back to the default primitive reflexive patterns of movement.

It is important for babies to spend time on the floor, and on their tummies. Inhibition of free movements by using strollers, bouncers and baby seats, or time spent in front of the TV may interfere with the natural order. 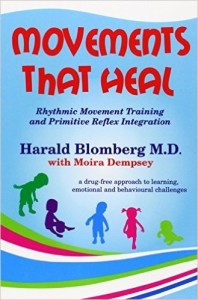 Retained reflexes in children and adults can be integrated through therapy. Neuroplasticity is the brain’s ability to reorganise and establish different neural connections through intervention. Rhythmic movement training is a therapy method where rhythmic movements are used to establish connections between the three main brain areas: The prefrontal cortex (the control centre), the midbrain or emotional brain and the cerebellum (balance, coordination and muscle tone). It also connects other areas of control like speech and vision. The rhythmic movements are used to inhibit primitive reflexes. Other therapies all include specific sequences of repetitive developmental movements to integrate reflexes. Slight isometric pressure techniques can be combined with inhibition movements to compound the effect.

What effects do retained primitive reflexes have?
The more skilled, higher patterns of learning and development are affected by retained reflexes. The postural reflexes and balance and righting reactions are disturbed. Without these higher brain automatic responses children expend a lot of energy trying to stay upright. Incomplete integration of reflexes may contribute to developmental delay, feeding and eating challenges and learning challenges. Speech and vision development may be influenced. Potty training takes much longer when children have retained reflexes. Emotional self-regulation becomes much more difficult under these conditions, causing anxiety or behavioural issues. When the primitive reflexes are not inhibited, they interfere with normal organisation and functioning of the nervous system in very specific ways. The type of interference depends on which reflex is retained. The sooner a primitive reflex is integrated, the better.

If not inhibited, primitive reflexes can be retained throughout life: A pronounced gag reflex (which is a normal adult reflex), may point to retained reflexes in adults.

Here is a list of some of the neonatal primitive reflexes and their effects:

The FPR is a withdrawal reflex, established in the second month after conception. The withdrawal reflexes are characterized by rapid withdrawal from stimuli and ‘freezing’ and is a protective response. During a stressful pregnancy, the FPR can cause foetal immobility when triggered, preventing the very movements that would have inhibited the reflex. When the FPR is retained, children and adults have a limited stress tolerance and are overly sensitive to sensory stimuli. They may be extremely sensitive to smells and tastes, as well as vestibular input. The reflex triggers the release of stress hormones. In some children it presents as withdrawal and shyness or seemingly irrational phobias, while others may act out. In adults it can result in panic attacks and social phobias. Children and adults with an active FPR find eye contact stressful, as it may trigger the reflex. The reflex is usually active in autism. The FPR and the Moro reflex go hand in hand. If the FPR is not integrated, both the Moro and Tonic Labyrinthe reflexes stay active.

This reflex is activated by loud noise or sudden movements, causing baby to throw her arms wide open. It is also referred to as the startle reflex. A baby’s own cry may trigger this reflex. The moro reflex begins to function in utero. If the moro reflex does not integrate within ages 3-6 months, it becomes an uncontrollable overreaction to sudden stimuli, overruling the frontal lobe or higher control centre of the brain. It over-stimulates the sympathetic nervous system, causing continuous fight or flight response. It may cause vision and reading or writing difficulties. When this reflex is integrated through treatment it may cause temporary developmental regression with cranky or demanding behaviour. Both the Moro and FPR cause anxiety and exhaustion.

A light stroke to a baby’s cheek or corner of the mouth activates this reflex for feeding. It causes baby to turn her face in that direction, open her mouth and extend her tongue for feeding.
When retained it causes problems with excessive dribbling, speech and articulation, difficulty with chewing and swallowing, gagging and hypersensitivity around the face and lips.

This reflex only starts developing around 32 weeks gestation and becomes fully developed around 36 weeks. Premature babies may have weak feeding ability as a result. Touching the roof of a baby’s mouth stimulates the sucking reflex. Babies push their tongue forward for latching and sucking. When the sucking reflex becomes integrated, the tongue moves more to the back of the mouth for pushing food down the throat.
Problems with this reflex may cause reflux, food texture sensitivities, excessive dribbling, speech and articulation problems.

There is a link between hand and mouth movements in early life (Babkin reflex). If this reflex is not integrated, children tend to stick their tongues out while writing.

Both the rooting and sucking reflexes may be active in picky eaters. 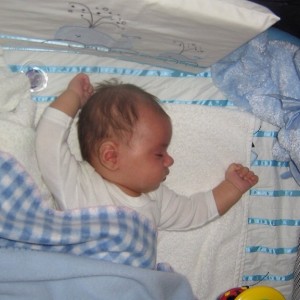 When a baby turns his head to one side, the arm and leg on that side extend away from the body. Once the reflex is integrated, baby can start to reach and have functional ability around the body midline. To cross the midline with arms or legs is very difficult with retained ATNR. If unintegrated, it creates difficulty with coordinated movement, balance and writing skills. A retained ATNR may interfere with establishing hand dominance. The role in vision development is especially important: The ATNR influences vision tracking, hand-eye coordination and object- and distance perception. Integration is sometimes necessary to improve eye movement for reading (saccades). A very strong retained ATNR may result in scoliosis.

The TLR is important for head control. It involves the vestibular system. It is triggered by forwards and backwards tilting of the head of babies. In infants it helps with development of posture, coordination and the proper head on neck alignment. Head alignment is vital for vision and eye tracking, balance, auditory processing and motor planning.

When unintegrated, children have trouble maintaining good posture in school and paying attention. They fatigue easily. They may have poor spatial awareness, depth perception and difficulty with climbing a rope or hanging from monkey bars.

Neurodevelopment and the presence of retained primitive reflexes are assessed and treated by pediatric occupational and physiotherapists.

WITH THANKS FOR USEFUL LINKS

I'D LOVE TO KNOW WHAT YOU THOUGHT OF THIS? Cancel reply

This site uses Akismet to reduce spam. Learn how your comment data is processed.